.
Overall Satisfactionc87
This is the best remote desktop app I've used for the iPhone.
I am very impressed with this program good job Wyse.
Best vnc /rep app out there.
Thanks WYSE for the awsome program.
Best remote tool I've used.
I like this app much better than logmein ignition.
I would highly recommend this product to others.
Fun & Engagingc91
Awesome RDP Solution.
Great app and pocket cloud is awesome.
Usefulnessc76
Everything works as advertised.
This is probably the most useful tool.
Simply the most useful app I have purchased.
Production Valuesc100
The operation is smooth and I love the novel mouse interface.
The keyboard and touch interface are unsurpassed.
Ease of Usec71
Great app and easy to setup and use.
Repeated downloads and attempts to install PC desktop Companion all failed.
It was easy to configure and the app is neatly designed.
The software pair is simple to set up on one's devices.
Reliabilityc81
windows 8 windows 7 windows vista windows xp windows 2003 amp.
Not working with windows 8 touch After dell purchase wyse.
Security & Privacyc96
Especially the seamless access behind firewalls via gmail account.
in app purchase you need a gmail account to purchase premium.
Gives me access to my computers from my mobile devices.
Access to my computers at home and work.
Updates & Supportc58
and after trying out the free version.
I contacted customer support and never heard back from them.
This is the best remote desktop app I've used for the iPhone. found in 94 reviews
Best vnc /rep app out there. found in 9 reviews
I like this app much better than logmein ignition. found in 4 reviews
Even over 3G on my iPad one it works incredibly well. found in 2 reviews
Best RDP and VNC client in the app store. found in 8 reviews
It was easy to configure and the app is neatly designed. found in 10 reviews
Use it for remote access to multiple servers. found in 59 reviews
Wyse Pocket Cloud Pro connects me to my business computer with ease. found in 14 reviews
1 features it does not support NLA. found in 2 reviews
works on the new iPad and crashes on the iPhone 4s. found in 1 reviews
Used to connect to work laptop with Cisco any connect VPN. found in 5 reviews
When entering a password to open another RDP session. found in 13 reviews
Worked flawlessly with Bluetooth keyboard until I upgraded to iOS 7. found in 18 reviews
- Starting in landscape mode doesn't work. found in 2 reviews
Worked great until update. found in 1 reviews
the premium features seem incomplete or at least partially implemented. found in 9 reviews
there needs to be addition of arrow keys to spacebar. found in 10 reviews
Please update for Lion remote desktop compatibility. found in 1 reviews
Just sell the product and don't nickel and dime the customer. found in 3 reviews
but what's the hold up on iPhone 5 support. found in 2 reviews
but unless I can connect to alternate port numbers. found in 1 reviews
My version of PCPro stopped working and customer service is ridiculous. found in 4 reviews
but if you will be using a bluetooth keyboard frequently. found in 18 reviews
but it poorly work with win8 touch interface. found in 5 reviews
Thin Browser vanished. found in 18 reviews
including after installing iOS 7. found in 6 reviews
iPad Resolution Incorrect / Will not change. found in 4 reviews
Needs iphone5 support. found in 4 reviews
Repeated downloads and attempts to install PC desktop Companion all failed. found in 13 reviews
Otherwise waste of $ 15 bucks. found in 6 reviews
Mac VNC Support fails. found in 5 reviews
The windows companion app doesn't work under windows 7 64 bit. found in 6 reviews
If you are iPhone and iPad owner,you now can download Wyse PocketCloud Pro - RDP / VNC / View (Remote Desktop) for $8.99 from Apple Store. The application is supporting English language. It weighs in at only 10MB to download. It is highly advisable to have the latest app version installed so that you don`t miss out on the fresh new features and improvements. The current app version has been released on 2014-11-22. The Apple Store includes a very useful feature that will check if your device and iOS version are both compatible with the app. Most iPhone and iPad are compatible. Here is the app`s compatibility information: Compatible with iPhone, iPod touch, and iPad. Requires iOS 3.0 or later
More Info: Find more info about Wyse PocketCloud Pro - RDP / VNC / View (Remote Desktop) in Wyse Technology Inc.`s Official Website : http://www.wyse.com/iphone

Wyse PocketCloud enables complete access to your work and home desktop over WiFi and 3G all your Windows and Mac applications & files on the palm of your hand. You no longer need to carry ...
​ 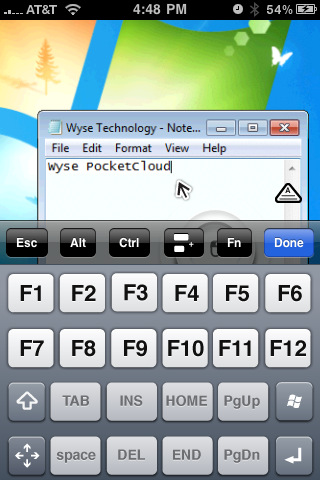 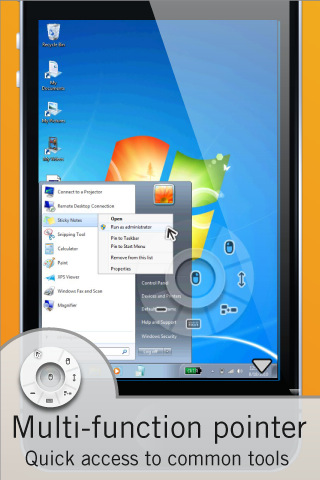 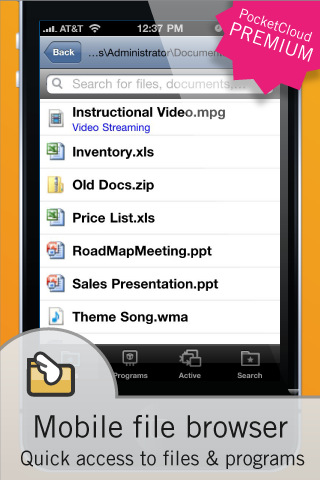 This app is popular with:
road warriors