.
Overall Satisfactionc93
It's cheap for the amazing game it is.
both or just zombie games in general you'll love this game.
I have read the series numerous times and love the show.
None the less one of the best games I've played.
Fans of the comic book will love the art style and graphics.
Need more levels and characters though.
Needs more levels.
please add iCloud saving and hurry up with the new levels.
I recommend this game to not only Walking Dead fans but anybody.
Fun & Engagingc94
Awesome game I love it specially the black and white effect.
Game is fun passes the time worth it.
It's game is super fun and involves a lot of strategy.
Need more levels and characters though.
Needs more levels.
It's a very fun game that does the walking dead justice.
I have had loads of fun with this game.
I'm having tons of fun with this game.
Replay Valuec86
please add iCloud saving and hurry up with the new levels.
yet replay value is very high and enjoyable.
Need more levels and characters though.
Needs more levels.
Good graphics and the game is challenging and fun.
but it seems like there is ton's of replay ability.
All the characters are so unique the combat style never gets old.
Social Aspectsc95
Plz add multiplayer.
Production Valuesc92
Game play is excellent and graphics are also great.
nice graphics and gameplay and the price is good.
Lost of fun and awesome graphics.
and good music / sound effects.
Very cool game and a very smooth game play.
Highly addictive and VERY polished game.
Great visuals.
great production values.
Ease of Usec96
This game is really cool with easy controls.
Easy controls and addictive gameplay.
Simple fun game.
Simple fun.
it's very fun and pretty intuitive.
Reliabilityc81
Updates & Supportc82
I find this is more fun than the Facebook version.
and have even played the Facebook version.
It's a great game for people who love the show. found in 3 reviews
It's a very fun game that does the walking dead justice. found in 13 reviews
addictive game that shows the brilliance of zombie killing. found in 13 reviews
Via the iPhone/iPads touch controls you will point. found in 7 reviews
Game of the year for ipad. found in 2 reviews
Captures the feel of the comic perfectly. found in 4 reviews
Awesome game I love it specially the black and white effect. found in 185 reviews
Thanks IGN for making this the game of the month. found in 11 reviews
For all the comic fans this game does the series justice. found in 5 reviews
Game is fun passes the time worth it. found in 30 reviews
Good action packed game w RPG very well included. found in 5 reviews
Love the black and white comic feel and the controls are excellent. found in 5 reviews
Best Game In The World all I can say. found in 2 reviews
It won't open up. found in 1 reviews
but otherwise a decent game. found in 6 reviews
It's a great game except for the occasional crash. found in 3 reviews
I cant even play it an it looks fun. found in 1 reviews
The controls are slow and unresponsive at times. found in 2 reviews
No cloud save. found in 2 reviews
Controls are a little frustrating sometimes when you have more than one character. found in 7 reviews
It keeps crashing on ipod 4th generation please fix it. found in 11 reviews
Really fun game but crashes every single time. found in 3 reviews
Too many annoying ads. found in 1 reviews
It really needs online. found in 1 reviews
no one has the time to hold down on the screen. found in 1 reviews
Awesome but gets boring after awhile. found in 7 reviews
It would be nice to add iCloud support. found in 5 reviews
Great game but needs a bit more depth and difficulty. found in 4 reviews
but needs a bug fix. found in 1 reviews
This is going to waste a lot of my time. found in 4 reviews
Need to finish the next installment ASAP. found in 6 reviews
but I had a lot of frustration in the 2nd level. found in 3 reviews
If you have read and watch the TV show. found in 2 reviews
erased to new game. found in 6 reviews
The game crashes and goes to the home screen. found in 3 reviews
No matter how many times I try to play. found in 2 reviews
another sorry money grab and I fell for it. found in 3 reviews
No update coming. found in 2 reviews
Will never get past initial load screen without crashing even with update. found in 2 reviews
On iPod 4th gen this app crashes I WANT MY MONEY BACK. found in 11 reviews
It wont load the first level. found in 3 reviews
We got our walking dead update today and still no new Episode. found in 3 reviews
This game freezes on the 2nd level. found in 3 reviews
The The Walking Dead: Assault is now available as a free download on Apple Store for both iPhone and iPad owners.The application is designed for use in English language. It weighs in at a hefty 207 MB, so make sure you have plenty of free space on your iOS device. It is highly advisable to have the latest app version installed so that you don`t miss out on the fresh new features and improvements. The current app version 1.0 has been released on 2014-11-13. The Apple Store includes a very useful feature that will check if your device and iOS version are both compatible with the app. Most iPhone and iPad are compatible. Here is the app`s compatibility information: Compatible with iPhone 3GS, iPhone 4, iPhone 4S, iPhone 5, iPod touch (3rd generation), iPod touch (4th generation), iPod touch (5th generation) and iPad. Requires iOS 4.3 or later. This app is optimized for iPhone 5.
Bottom Line: For more information about The Walking Dead: Assault check developer The Walking Dead: Assault`s website : http://www.thewalkingdeadassault.com 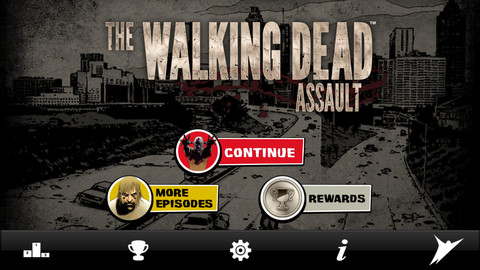 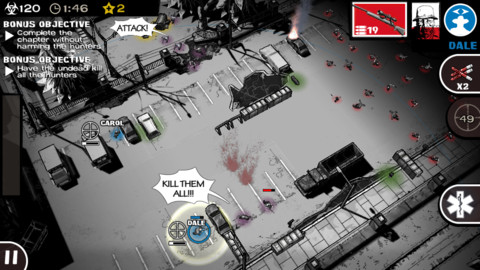 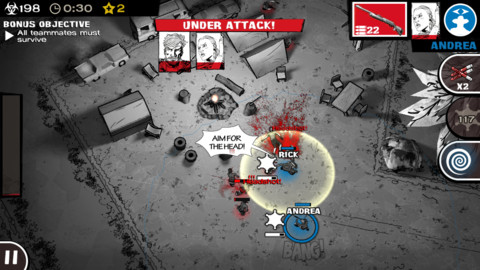 This app is popular with:
comic fanswalkers

More by The Walking Dead: Assault