.
Overall Satisfactionc84
making this once again the best Google Reader client in the App Store.
Thank you for making the best Google Reader experience on the iPhone.
Would really enjoy a " pull to refresh " function.
Have to re -install daily.
Reeder is THE best native app for reading Google Reader yet.
Reeder is hands-down the best newsreader available on iPhone.
Thanks to the developer for making a great app even better.
Reeder is certainly the best RSS aggregator available right now.
Never thought I'd find one better than netnewswire.
Fun & Engagingc71
Awesome Google Reader App.
This is an awesome RSS reader for iPhone.
Usefulnessc92
none are as beautiful and useful as Reeder.
One of my most essential apps.
An Indispensable App.
and this one just blows everything else out of the water.
Useful and Elegant.
Social Aspectsc68
the social integration you want.
The best BB " social feeds " replacement on the ios.
Production Valuesc64
I think even faster than gReaders web interface.
Works perfectly and the interface is beautiful and intuitive IMO.
the new animations and transitions are absolutely gorgeous.
Ease of Usec83
Very fast and intuitive.
fast and intuitive.
Reliabilityc24
Security & Privacyc42
Time to add more account support.
Updates & Supportc58
I actually like it better than the iPad version.
This version feels a lot better.
making this once again the best Google Reader client in the App Store. found in 376 reviews
It is much better than flipboard for google reader integration. found in 6 reviews
Reeder is hands-down the best newsreader available on iPhone. found in 13 reviews
This last update made this my new favorite news reader. found in 23 reviews
Never thought I'd find one better than netnewswire. found in 4 reviews
Add these and this will be the best RSS reader out there. found in 369 reviews
It is definitely the best RSS feed reader in the App Store. found in 47 reviews
Only complaint would not being able to directly post to facebook. found in 17 reviews
With the latest update it turned into a convoluted mess. found in 1 reviews
please add Facebook sharing them it will be 5 stars. found in 6 reviews
without having to open up Google Reader
It’s ridiculous you can add subscriptions but never remove them. found in 4 reviews
Faster than NewsRack but not as good as MobileRSS Pro. found in 6 reviews
Not sure why it doesn't send links to Facebook though. found in 3 reviews
there's no way to sort by feeds within a folder. found in 6 reviews
Will not let me add new subscriptions. found in 2 reviews
one feature request --- page caching for truncated feeds. found in 3 reviews
But can sync data before update latest version with me. found in 1 reviews
This app would be great if it let you zoom images. found in 3 reviews
because it lets you quickly subscribe and unsubscribe to feeds. found in 8 reviews
Reeder also lacks the ability to save images from feeds. found in 4 reviews
Local feeds sometimes won't load on LTE but works perfectly on wifi. found in 1 reviews
0 changes EXCEPT for the utterly pointless " swipe to go back from articles". found in 32 reviews
When I open articles using mobilizers I can't view comments. found in 5 reviews
Otherwise application works fine. found in 24 reviews
I loved this app until the Google Share feature was removed. found in 1 reviews
It's what I'd hoped Reeder for iPad would be. found in 7 reviews
still no ability to mark as read hike you scroll. found in 32 reviews
After the latest update image caching wont work :. found in 12 reviews
No easy way to go back to feed list. found in 8 reviews
Needs option to search and subscribe to news feeds from within app. found in 14 reviews
It won't let me add new feeds. found in 14 reviews
it's just terrible compared to MobileRSS Pro. found in 6 reviews
Have to re -install daily. found in 8 reviews
No Twitter/ Facebook integration Two stars only for the initial impression. found in 12 reviews
It simply can't handle a large number of feeds. found in 6 reviews
Cannot manage subscriptions. found in 8 reviews
and apparently they don't motivate the author to fix his bugs. found in 15 reviews
it has been EXTREMELY crashy since iOS 4 on my 3GS. found in 17 reviews
so it's not the individual feeds that are making it crash. found in 9 reviews
If you are iPhone and iPad owner,you now can download Reeder for free from Apple Store. The application is supporting English language. It weighs in at only 10MB to download. The new Reeder app version 3.0.3 has been updated on 2014-11-29. The Apple Store includes a very useful feature that will check if your device and iOS version are both compatible with the app. Most iPhone and iPad are compatible. Here is the app`s compatibility information: Compatible with iPhone, iPod touch, and iPad. Requires iPhone OS 3.0 or later.
More Info: Find more info about Reeder in Silvio Rizzi`s Official Website : http://reederapp.com 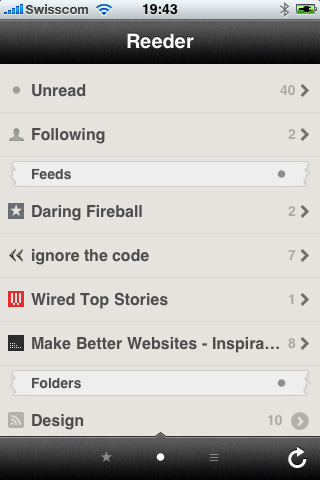 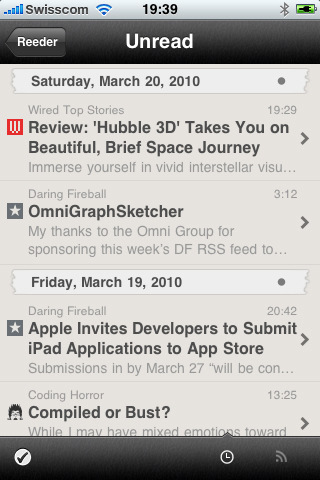 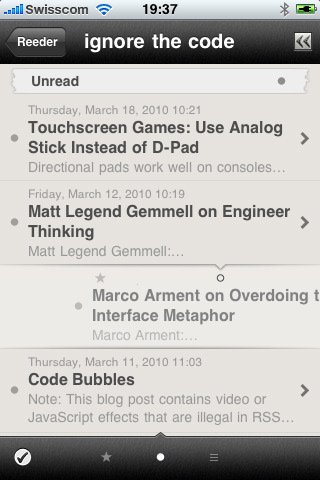 This app is popular with:
news junkiessingles