The Oddland is now available as a free download on Apple Store for both iPhone and iPad owners.The application is supporting English language. It weighs in at a hefty 161 MB, so make sure you have plenty of free space on your iOS device. It is highly advisable to have the latest app version installed so that you don`t miss out on the fresh new features and improvements. The current app version 1.0 has been released on 2014-11-16. The Apple Store includes a very useful feature that will check if your device and iOS version are both compatible with the app. Most iPhone and iPad are compatible. Here is the app`s compatibility information: Compatible with iPhone 3GS, iPhone 4, iPhone 4S, iPhone 5, iPod touch (3rd generation), iPod touch (4th generation), iPod touch (5th generation) and iPad. Requires iOS 4.3 or later. This app is optimized for iPhone 5.
More Info: Find more info about Oddland in G4M3 Studios`s Official Website : http://www.oddlandthegame.com/

Become the OddLander Enforce the law in a post-apocalyptic future, full of mutants and bands of criminals, facing duels with all kind of enemies. OddLand is a duel shooter that will leave you breathless Single Player Modes: - ...

This game is sweet I thing Ill say welcome to the GUN SHOW From Tom                 Oddland
I will give five stars so you can update                 The game freezes
I will give this a 2 star rating because i can not even start toutorial        Crashes
Garbage Stand still slowexpensive shooterNO MOVEMENT        Dont fall for it
I thought the game looked really good and decided to try it I could never even play the game Crashed every single time right after it said loading a waiting screen came up with tip of the day then crash Tried 20 times even tried deleting and reloading and same problem     Oddland
This game will often not make it past the person of the day screen and crash please try to fix this           Still a serious problem
Fantastic art Love the bullet time                 Great game
This game crashes literally every time it is booted up Is 100 not worth the hassle pain and wasted time and for some reason I have to give it at least one star but it doesnt even come close to deserve even one     Oddland
I was scrolling through games when I saw oddlands I downloaded it because of that western wasteland look and feel a trait that my two favorite games fallout new vegas and red dead redemption share Theyre not around anymore so Im enjoying oddlands The customization options are cool Updates that expand on them would be great Updates that stop the screen freezing are needed Any way to make the world bigger and richer as well as filled with more content would be good I want more wasteland scenarios Maybe an option to turn part of the map to shelter that generates resources You would have to defend these from gangs and combat mutants when theyre attacked Maybe defending them from other players would encourage online play The difficulty makes me want to come back and give it another go Boss battles are bit hard tho I feel like theyre left partially to luck Its rewarding to win against any enemy though I can see this game with a bunch of guns The graphics are pretty good and they add some value to weapons What if players can barter and trade guns Thatd be cool This is just my 2 cents Great game Im looking forward to updates              Found A Gem
Looks great but gameplay controls are not very good        Meh
I tried to download and run this game I 2 different devices and it didnt work on either     Please fix it
The game has really great graphic I am giving 3 stars because of two reasons 1 the game freezescrashes In the first that I played the game frozen when I need to reload 2 The controls are not really good I think the user must have the options to control its sensibility The gun reload by rotating the device is not good also I prefer to have the reload as normal button together with the others           Nice graphic but needs improvement
I rated it five stars because I want updates It will be fun if you stopped freezing But will be fun if more updates                 Okey
By Kostas Gar.
​ 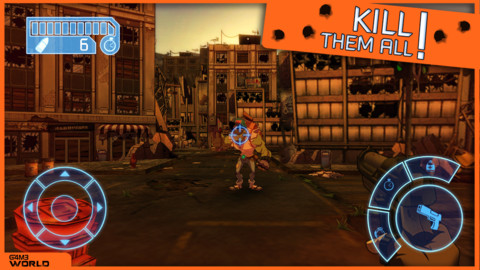 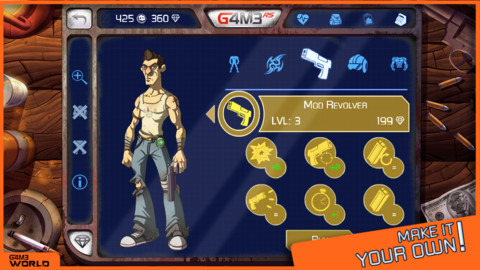