.
Overall Satisfactionc43
Best football game available from the apple store.
I can't even play a football game without it crashing.
It is my favorite game I've ever played on my phone.
It would be one of my favorite games if it didn't crash so much.
Other than the glitches i think this is an amazing game.
Amazing game just needs to fix the crashing bug.
The best sports game I've downloaded in a long time.
EA is officially the worst sports game company in the world.
Best NFL Football game in the app store.
Changed to be a junk nfl game.
Overall Good job EA.
Fun & Engagingc54
I think this is a pretty awesome game for an IPAD.
Other then that awesome game please fix the problem.
This is a really fun game that I suggest you buy.
But it's a really fun game when it doesn't crash.
Overall the game itself is solid.
Best game ever super fun and like the challenges.
Very fun and addicting.
it is fun when it works.
Usefulnessc13
Wish there was a paid version that would unlock everything.
Value for Moneyc24
you will need to spend money to advance faster.
You can finish the game without spending a dime.
Social Aspectsc46
It's a pretty legit take on a head to head madden game.
Great way to play with friends whenever and wherever.
Finally best multiplayer game for iOS.
But can you make it possible to trade player cards with friends.
Production Valuesc39
I enjoyed the game play plus it's so easy to control.
Overall the graphics and gameplay are pretty good overall.
Keeps exiting out during game.
fun and graphics are awesome.
Reliabilityc31
Takes way to much to earn coins.
And it happens every time i play after like 3 minutes.
Security & Privacyc35
Updates & Supportc45
Just like the console version.
go buy the console version.
Please make it more like the console version and better graphics.
Great game better than Xbox version.
They need a new update.
Great way to play with friends whenever and wherever. found in 9 reviews
the game crashes WAY too much and not enough plays on it. found in 26 reviews
Love the game but it crashes every time I try to play it. found in 73 reviews
Whenever i play it crashes on my IPad mini please fix. found in 60 reviews
needs to stop crashing and add replays 5 stars later on. found in 48 reviews
It keeps crashing everytime I try to play please fix it. found in 81 reviews
I can't play a full game without it disconnecting. found in 158 reviews
This game would be great if it didn't crash after every play. found in 14 reviews
I can't even play anymore because it always crashes before I can start. found in 159 reviews
New update keeps crashing on my iPad mini was a great game now crap. found in 13 reviews
Ever time I try to play a game it crashes in the middle of it. found in 143 reviews
It would be awesome if you make it compatible with Ipod 5th Gen. found in 28 reviews
I CANT EVEN PLAY A SINGLE GAME WITHOUT IT CRASHING. found in 50 reviews
It crashes way to much cant even choose a play with it crashing. found in 138 reviews
The game continues to crash and sometimes lock me out all together. found in 61 reviews
One on my Ipad 2 the app crashes every time I play it. found in 81 reviews
Game keeps crashing and going back to home screen. found in 76 reviews
EA please fix this and this will be a five star game. found in 22 reviews
Please fix the crashing and i will give it a 5 star. found in 38 reviews
I can't even begin playing a game without it crashing. found in 119 reviews
Additionally the EA Sports support through Origin is worthless. found in 103 reviews
In game play controls are worse than previous madden. found in 97 reviews
Need crap load of real money to buy players and plays. found in 95 reviews
I really like the game but it crashes every time I try to play. found in 73 reviews
Still locked up & unable to play practice games & earn money. found in 104 reviews
Literally crashes every other play impossible to play one game. found in 63 reviews
Fun but Crashes way to much It won't even let me play anymore. found in 138 reviews
I can't play the game without it crashing pleases fix it. found in 119 reviews
The game crashes every time I play and there are no rewards. found in 81 reviews
This game is worthless if you can't play without it crashing. found in 66 reviews
I can't even finish one full game without it crashing. found in 158 reviews
just a freakin rip-off how it's a pay to play game. found in 64 reviews
eventually stats mean nothing and YOU WILL HAVE TO SPEND MONEY. found in 125 reviews
On iPod 5 it crashes every time I try to play a game. found in 143 reviews
The gameplay itself is alright but the auction house is SLOWWWW. found in 69 reviews
Needs to be fixed ASAP game keeps crashing while being played. found in 76 reviews
Don't even bother downloading this for your iPad Mini. found in 82 reviews
If you are iPhone and iPad owner,you now can download Madden NFL 25 by EA SPORTS™ for free from Apple Store. The application is designed for use in English language. It is a whopper, weighing in at 702 MB, so make sure you have plenty of free space on your iOS device. The new Madden NFL 25 by EA SPORTS™ app version 1.0.7 has been updated on 2014-11-03. For ensuring consistency with the device you should take into account the following app compatibility information: Compatible with iPhone 4, iPhone 4S, iPhone 5, iPad 2 Wi-Fi, iPad 2 Wi-Fi + 3G, iPad (3rd generation), iPad Wi-Fi + 4G, iPad (4th generation), iPad Wi-Fi + Cellular (4th generation), iPad mini and iPad mini Wi-Fi + Cellular. Requires iOS 5.0 or later. This app is optimized for iPhone 5.
Bottom Line: For more information about Madden NFL 25 by EA SPORTS™ check developer Electronic Arts`s website : http://www.ea.com/iphone

An experience 25 years in the making EA SPORTS delivers the most authentic NFL football experience to date on iPhone and iPad with MADDEN NFL 25. Build your Ultimate Team of NFL stars and run ...
​ 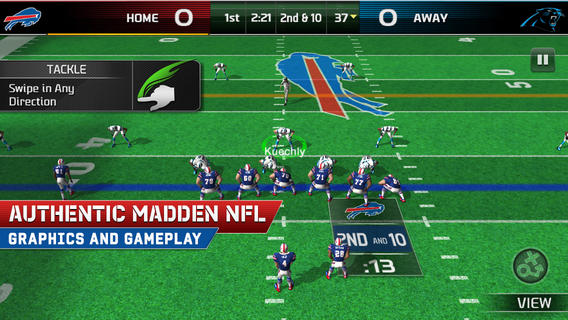 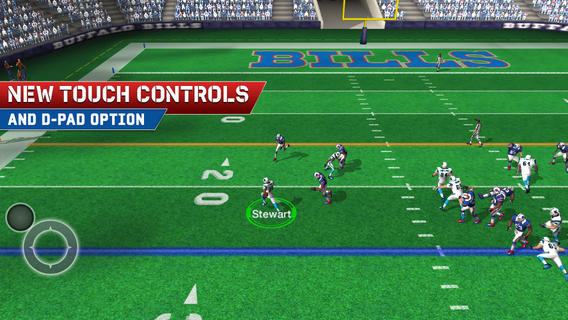 This app is popular with:
nfl fanssinglesfootball fans