.
Overall Satisfactionc89
because this is such an amazing game.
One of the best RPGs I've played in a long time.
One of the best iOS games I have played in a really long time.
I would highly recommend this game to anyone looking for a marvelous RPG game.
On the downside there are some bugs that need to be fixed.
Needs to be fixed soon.
I think this is the best iOS game I've ever played.
The new update added more quests and characters.
besides that glitch it's a wonderful game.
Fun & Engagingc91
Awesome game that keeps your playing for days on end.
This is a super fun game.
addicting game that has a funny story line.
The new update added more quests and characters.
Very fun game with plenty of quests to do.
Tons of fun.
gameplay is fun and challenging.
Value for Moneyc54
Never had to spend real $$ for gold.
Replay Valuec75
Has a high replay value with different combinations of characters.
and tons of classes and replay ability for ages.
becomes repetitive.
Excellent and Challenging.
Production Valuesc100
not only because of nostalgic 8- bit graphics and audio.
The 8 bit graphics take me back to NES RPG days.
Ease of Usec86
and even with the simple gameplay and lackluster translation.
Between the simple gameplay concept.
A simple feature to add plz :3.
Reliabilityc58
Game freezes.
They would get their 5 star once they fixed the bugs.
Thanks for fixing the bug. found in 3 reviews
It is still a great game for the price and never. found in 2 reviews
There is a very nice sense of humor injected into every action. found in 6 reviews
Retro RPG with modern game design. found in 5 reviews
It is the best RPG game I have ever played. found in 14 reviews
Very fun game with plenty of quests to do. found in 6 reviews
addicting game that has a funny story line. found in 9 reviews
Great game and time passer. found in 2 reviews
One of the best RPGs I've played in a long time. found in 37 reviews
This game has provided me an my friends with loads of fun. found in 3 reviews
Has a high replay value with different combinations of characters. found in 17 reviews
Innovative and nostalgic with tons of pop culture references. found in 6 reviews
Game freezes. found in 3 reviews
If this had iCloud support I would give it 5 stars. found in 4 reviews
making it impossible to finish the main quest. found in 6 reviews
And I'm getting ticked. found in 2 reviews
Great game but not fully working. found in 1 reviews
Great game but buggy. found in 1 reviews
badly executed. found in 1 reviews
but there's no way to sync save data between iPhone and iPad. found in 2 reviews
OK Game at first - gets boring /repetitive VERY quickly. found in 4 reviews
forcing me to buy gold with real money. found in 3 reviews
I have to close and reopen the app to fix it. found in 7 reviews
Can't progress. found in 3 reviews
The Paladin Class Needs To Be Fixed Please. found in 9 reviews
but something's missing. found in 1 reviews
This game wasn't free I already paid upfront for the game. found in 11 reviews
I still can't progress. found in 3 reviews
It is almost impossible to earn money in-between missions. found in 3 reviews
I don't wish to grind forever to resurrect my fallen comrades. found in 9 reviews
You guys need to fix this ASAP. found in 7 reviews
If you are iPhone and iPad owner,you now can download Knights of Pen & Paper for $2.99 from Apple Store. The application is designed for use in English language. It weighs in at only 28.0 MB to download. It is highly advisable to have the latest app version installed so that you don`t miss out on the fresh new features and improvements. The current app version 1.04 has been released on 2014-11-29. The Apple Store includes a very useful feature that will check if your device and iOS version are both compatible with the app. Most iPhone and iPad are compatible. Here is the app`s compatibility information: Compatible with iPhone 3GS, iPhone 4, iPhone 4S, iPhone 5, iPod touch (3rd generation), iPod touch (4th generation), iPod touch (5th generation) and iPad. Requires iOS 4.3 or later.
More Info: Find more info about Knights of Pen & Paper in Behold Studios Jogos Eletronicos LTDA ME`s Official Website : http://beholdstudios.com.br

Knights of Pen&Paper is an indie turn-based retro style pixel-art RPG. Inspired by the great titles of the 90`s, play this game feels like you are playing a traditional pen and paper RPG. The player gets ... 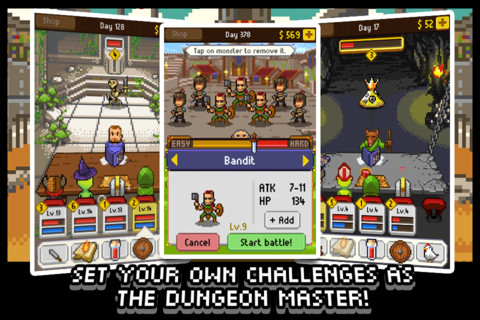 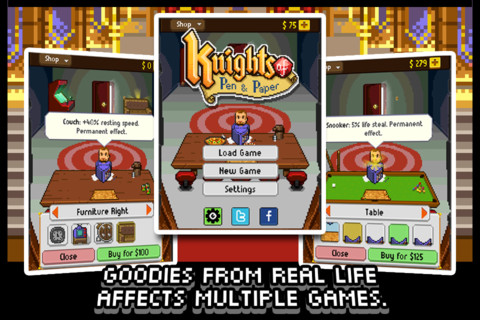 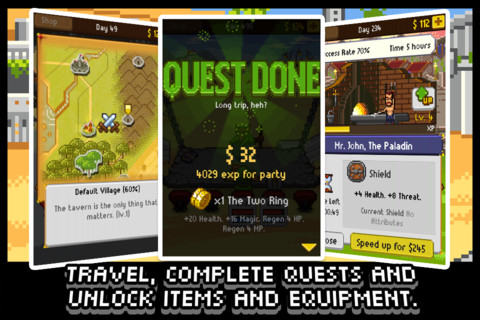 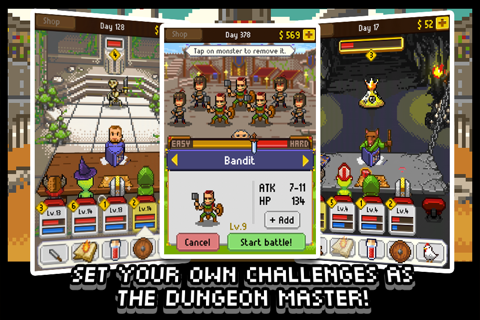 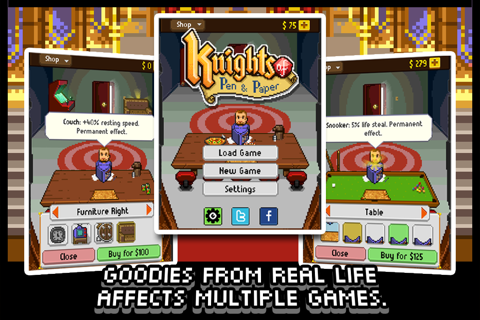 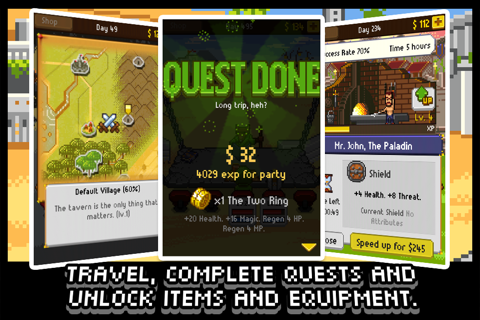 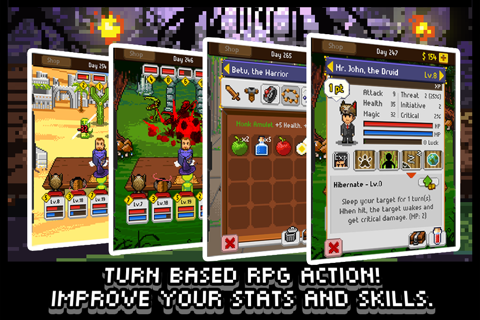 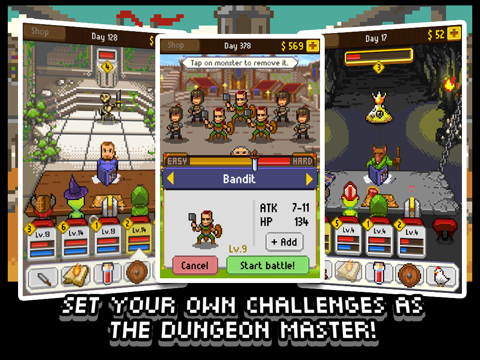 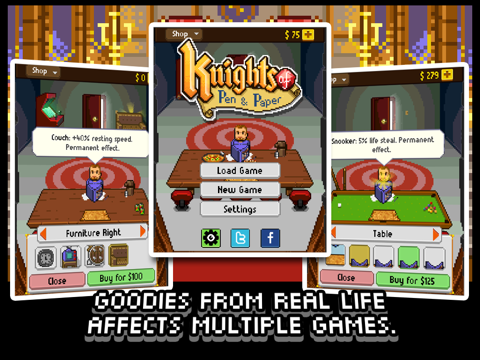 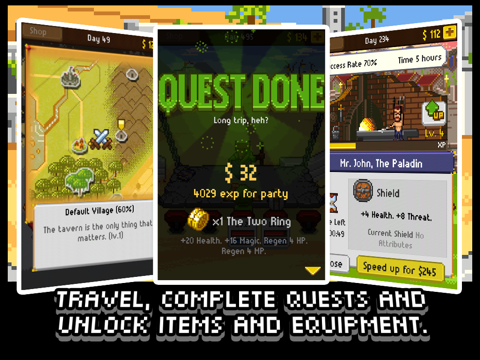 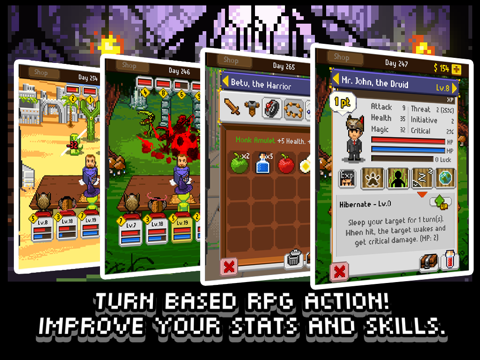 This app is popular with:
rpg fans