.
Overall Satisfactionc76
its about 10 times better than the official google voice app from google.
Avoid until better development or the official google voice app.
This app is the best GV app out there on the iPhone.
Push notif setup is a little involved.
This app needs push notifications before it is worth spending any $ on.
thanks sean for making it free for the night.
Thanks Sean for Screwing Over your Original Customers.
Thank you Apple for finally approving it.
Needs spellcheck.
This app is definitely better than the native app.
I highly recommend GV Mobile Plus to heavy Google Voice users.
I recommend GV Connect.
Fun & Engagingc91
Thank you to the developer for an awesome app.
Thank you for an awesome app.
Really flexible and support is awesome from Sean.
The support is awesome too.
Usefulnessc93
Everything ok and has push.
I use it everyday all day long.
It definitely helps me run my business from A to Z.
Production Valuesc65
Very clean and easy to use interface and all works well so far.
Fully functional with an easy to use interface.
The voicemail and SMS interface is awesome.
Ease of Usec77
Very clean and easy to use interface and all works well so far.
Fully functional with an easy to use interface.
Reliabilityc29
And to the magic key users.
Push notif setup is a little involved.
The push notification doesn't work at all.
Security & Privacyc40
The best way to use/manage my GV account.
I look forward to push notifications and multiple account support.
Updates & Supportc71
Works just like the Cydia version.
Really flexible and support is awesome from Sean.
The latest update makes it perfect.
Excellent customer service.
This actually makes GV usable on the iPhone. found in 2 reviews
This app is the best GV app out there on the iPhone. found in 111 reviews
I like being able to switch between multiple Google Voice accounts too. found in 4 reviews
I am looking forward to the future updates to add features to this app. found in 3 reviews
EDIT: May 14 2011
Much better than the default app from google. found in 2 reviews
There's a bug with SMS grouping. found in 6 reviews
Best Gvoice app out there. found in 4 reviews
This blow the official google app out of the water. found in 2 reviews
Come on it needs an update with at least auto correct. found in 9 reviews
I downloaded both gv connect and gv mobile both work great BUT
Doesn't work on iPad though. found in 5 reviews
The magic key error was due to multiple account sign in. found in 74 reviews
But now crashes every time I try to send a picture. found in 26 reviews
Update:
I tried gv connect first and couldn't "connect" - pun intended. found in 81 reviews
You still can't receive pic messages. found in 4 reviews
For those who are complaining about the "cannot connect to google " error. found in 23 reviews
It's ok but not as good as other GV iPhone clients. found in 1 reviews
Multiple Sign -on. found in 16 reviews
With the exception of lacking push notifications and not being free. found in 2 reviews
Update removes favorite contacts and spell check doesn't seem to work. found in 3 reviews
Great but needs push to be really useful. found in 3 reviews
but having an iPod Touch 4g - this app is pretty much useless. found in 3 reviews
Needs font size adjustment and optimization for new iPad retina display. found in 3 reviews
I would have no need to pay for texts. found in 17 reviews
Having to open an application to check for text messages. found in 4 reviews
1. found in 5 reviews
Needs spell check and push. found in 5 reviews
Thanks Sean for Screwing Over your Original Customers. found in 1 reviews
message when I try to sign in. found in 9 reviews
GV Connect developer keeps updating and improving the app. found in 81 reviews
GV Mobile + gives you the infamous " Magic Key Error. found in 74 reviews
and I have to retry to send my message multiple times. found in 26 reviews
Doesn't do anything different than the free google sponsored version. found in 17 reviews
Annoyed at having to pay twice. found in 17 reviews
The app won't allow me to log into my GV account. found in 11 reviews
And waiting 45 seconds to dial a number is ridiculous. found in 13 reviews
After update I can't send any SMS messages :. found in 17 reviews
but it is pretty useless without push notifications. found in 13 reviews
problem occurred when trying to connect to google voice. found in 34 reviews
It always says magic key error when try to login. found in 17 reviews
Ever since the update I cannot make calls. found in 17 reviews
Can keep Google multiple sign -in and GV Connect still works. found in 16 reviews
The developer needs to update this app. found in 13 reviews
The GV Mobile + | The Original Google Voice App is now available for $2.99 for both iPhone and iPad owners.The application is supporting English language. It weighs in at only 3.6 MB to download. It is highly advisable to have the latest app version installed so that you don`t miss out on the fresh new features and improvements. The current app version 2.5.7 has been released on 2014-11-28. The Apple Store includes a very useful feature that will check if your device and iOS version are both compatible with the app. Most iPhone and iPad are compatible. Here is the app`s compatibility information: Compatible with iPhone, iPod touch, iPad, and ix.Mac.MarketingName. Requires iOS 3.1.3 or later
More Info: Find more info about GV Mobile + | The Original Google Voice App in SK Dev Solutions, LLC`s Official Website : http://www.seankovacs.com

The ORIGINAL Google Voice app is back and better than ever See the video here: http://goo.gl/OHCZQ Google Voice is only available in The United States. You must already have a Google Voice account in order for this application ... 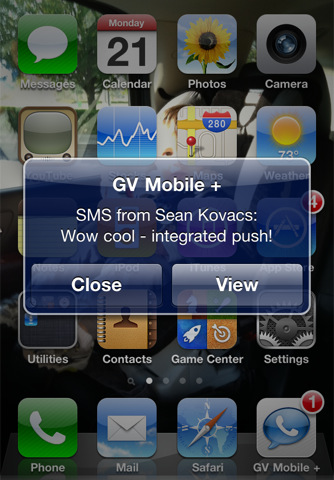 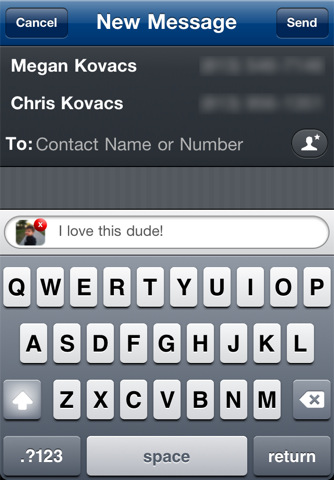 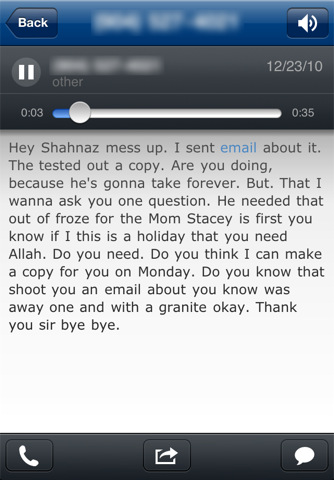 This app is popular with:
ipod users