.
Overall Satisfactionc95
Best news app - and best of many Drudge versions.
Only spot for real news on iTunes.
Balanced and I believe pretty accurate-- thanks Drudge staff.
Thanks Matt Drudge for being an honest and dependable news source.
Better then official drudge App with speed and reliability.
Long may it reign as the best site on the web.
Stay informed and entertained day after day.
Fun & Engagingc88
I go to Drudge before any other news site.
impossible to navigate back to Drudge without the tiny column buttons.
Awesome news /headline news destination.
Usefulnessc97
My primary source for up to date news followed only by FOXNEWS.
It is a fast and convenient way to stay informed.
Drudge is awesome for anyone who wants to stay informed.
I read Drudge every day I like its up to date articles.
I check Drudge everyday and love what they put on there.
All the useful news you need without spin.
I look at this site every day and love it.
Easy to navigate and everything you need to know.
Production Valuesc46
Ease of Usec95
Easy to scan and keeps me current on political info.
You read news that you never hear from the networks.
Great information on an easy to read format.
Interface is exceedingly simple to navigate.
It is a fast and convenient way to stay informed.
Reliabilityc100
Ads not Intrusivec75
Updates & Supportc84
Some linked pages do not render correctly in the " Optimized Version.
Only downfall is having to press optimized version each time.
This is much improved over the free version.
99 over the free version.
Drudge provides a broad perspective of news events. found in 25 reviews
My primary source for up to date news followed only by FOXNEWS. found in 155 reviews
First place I go to get the rundown on current events. found in 34 reviews
Best source of news that others won't cover. found in 100 reviews
Great news source that has stood the test of time. found in 330 reviews
I'm a daily reader - it's great news source. found in 19 reviews
appreciate excellent news coverage. found in 15 reviews
A great source for news Not the standard slanted presentatio. found in 116 reviews
Best news site online and as an app. found in 78 reviews
THE conservative news aggregator site in a convenient App. found in 14 reviews
Best news app - and best of many Drudge versions. found in 425 reviews
As a retired anchor/reporter I
Makes other news outlets look like elementary school morning announcements. found in 41 reviews
Provides the news no one else will provide. found in 6 reviews
Nice But Horrible Format /Interface. found in 3 reviews
I gave it 4 stars because sometimes the links don't work. found in 10 reviews
Unfortunately lately many links have not been working. found in 3 reviews
A lot of the links do not load properly. found in 1 reviews
Daily Glancing- wish the content was more valuable. found in 2 reviews
Occasional broken links keep me from giving it five stars. found in 4 reviews
buy now it won't load the site. found in 1 reviews
impossible to navigate back to Drudge without the tiny column buttons. found in 3 reviews
Doesn't work after iOS 5. found in 8 reviews
Needs better interface. found in 2 reviews
Buy it so you can avoid the obnoxious ads. found in 3 reviews
Easy and quick way to get my drudge fix. found in 7 reviews
Why won't "important" stories open TAWANDA. found in 3 reviews
Good but wish I could save pictures. found in 1 reviews
but this app still needs some improvement. found in 3 reviews
politically incorrect. found in 2 reviews
but I agree with others it is a difficult read on the iphone. found in 3 reviews
Links to stories the lame-stream media refuse to cover. found in 4 reviews
Seems like more and more links don't work. found in 10 reviews
needs a serious update. found in 2 reviews
This is THE WORST news app in the app store. found in 6 reviews
Save your money and open your safari browser. found in 4 reviews
And there is still no iPhone 5 support. found in 10 reviews
Drudge needs to reconsider smartest apple. found in 3 reviews
Horrible format. found in 3 reviews
Don't get this app if you have iOS 5. found in 8 reviews
I love the Drudge website but the app needs work. found in 4 reviews
It CONSTANTLY has broken links. found in 4 reviews
The Drudge Report is now available for $1.99 for both iPhone and iPad owners.The application is supporting English language. It weighs in at only 10MB to download. The new Drudge Report app version 25.0 has been updated on 2014-11-29. For ensuring consistency with the device you should take into account the following app compatibility information: Compatible with iPhone, iPod touch, and iPad. Requires iPhone OS 3.0 or later.
Bottom Line: For more information about Drudge Report check developer New & Popular`s website : http://smartestapple.com

Use our app to view the Drudge Report in the fastest way possible. This is possible through our minimalistic, efficient method of displaying the Drudge Report. This app cuts the fat out for you while ...
​ 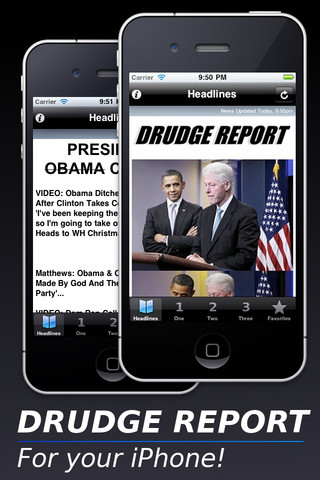 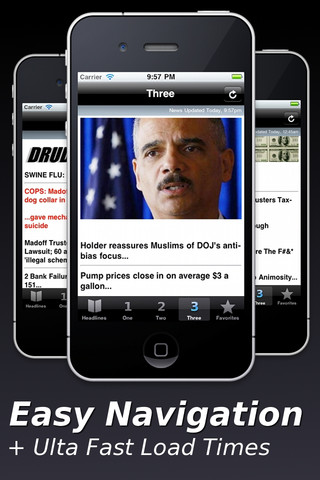 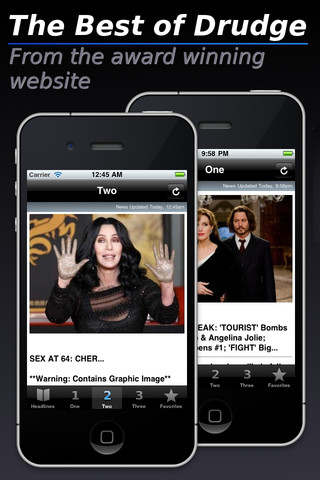 This app is popular with:
news junkies