.
Overall Satisfactionc93
Best DJ app out there right now for sure.
Best djay app so cool could be used by actual DJs.
Probably one of the best DJ apps out there for this price.
I think you should add sound effects or more effects.
Thiss is thee perfect app for music lovers get it its worth $$.
The best 99 cent I ever spent hands down.
the sound quality is wonderful.
Best dollar I ever spent in my life.
Fun & Engagingc91
It's a great app and fun to play around with.
I think you should add sound effects or more effects.
Fun to mess around with and great for parties on the auto mix.
Awesome djay stuff and very user friendly.
Tons of fun and looking forward to playing more.
Very addictive app.
Fun to make some jams while killing time somewhere.
Fn Awesome.
Usefulnessc100
Everything a Dj needs been on this thing for hours.
Great for everything a DJ does.
This lil app has everything you need to spin your music collection.
This app has everything you need.
Production Valuesc92
I think you should add sound effects or more effects.
Very smooth and easy interface.
Ease of Usec97
the auto tune is amazing and it's easy to control.
app is so beast and easy to control.
Very smooth and easy interface.
easy interface for new users.
Amazingly simple yet refined enough to really get dirty.
Amazingly simple.
Honestly one of the best mobile dj apps available for the iphone. found in 18 reviews
Anyone who likes to kill time mixing your favorite music. found in 13 reviews
This is one of the most amazing program for Dj's. found in 29 reviews
Best DJ app out there right now for sure. found in 626 reviews
Great for parties and very entertaining just to play on. found in 37 reviews
This app is the best app for DJ use out there. found in 36 reviews
And I could actually play at a house party with this. found in 22 reviews
Needs beat sync/match. found in 3 reviews
Needs pitch lock for iphone4. found in 4 reviews
Some effects would be nice as well. found in 3 reviews
But it'd be five stars with. found in 1 reviews
especially if you buy your music from iTunes. found in 2 reviews
Great app but lately. found in 1 reviews
I can't file share my mixes anymore. found in 2 reviews
Needs beat sync /match. found in 3 reviews
It says could not load track. found in 3 reviews
Cant use with itunes match. found in 17 reviews
See what they say otherwise i'll address the issue to apple. found in 5 reviews
I'm rating this 3 stars until I see improvements. found in 2 reviews
One request to make it perfect would be a key lock feature. found in 11 reviews
Don't know if I will get the griffin cable yet though. found in 4 reviews
but there should be a lock button for the fx. found in 4 reviews
Please fix for iOS5 asap :. found in 1 reviews
The sound clips badly when using the split output. found in 2 reviews
the BPM sync isn't working for house music. found in 5 reviews
I wish they would add audio effects. found in 3 reviews
It wont download to my ipod touch 3rd G. found in 4 reviews
neither does changing any iTunes match settings or resetting. found in 17 reviews
please make available to 2nd gen itouch please. found in 4 reviews
open gl es does not allow install. found in 2 reviews
this app needs pitch preserve. found in 4 reviews
App does not download to 3rd gen touches. found in 7 reviews
Please put that on your wish list. found in 3 reviews
It won't let me play songs. found in 4 reviews
the controller doesn't work anymore. found in 2 reviews
If you are iPhone and iPad owner,you now can download djay for iPhone & iPod touch for $0.99 from Apple Store. The application is designed for use in English language. It weighs in at only 8.5 MB to download. The new djay for iPhone & iPod touch app version 1.5 has been updated on 2014-11-29. The Apple Store includes a very useful feature that will check if your device and iOS version are both compatible with the app. Most iPhone and iPad are compatible. Here is the app`s compatibility information: Compatible with iPhone 3GS, iPhone 4, iPod touch (3rd generation), iPod touch (4th generation), and iPad. Requires iOS 4.2 or later.
Bottom Line: For more information about djay for iPhone & iPod touch check developer algoriddim`s website : http://www.algoriddim.com/djay-iphone

50% OFF FOR A LIMITED TIME ONLY Get the hottest party app and start spinning your own music today Ready to rock your next party? The premier DJ app (featured in Apple`s iPad TV commercial) ...
​ 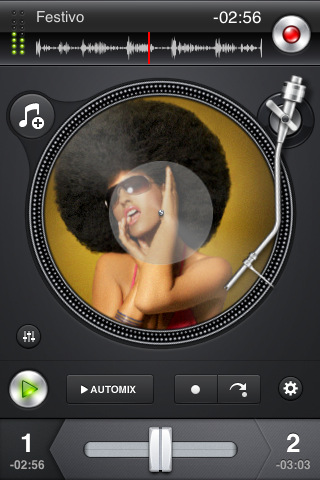 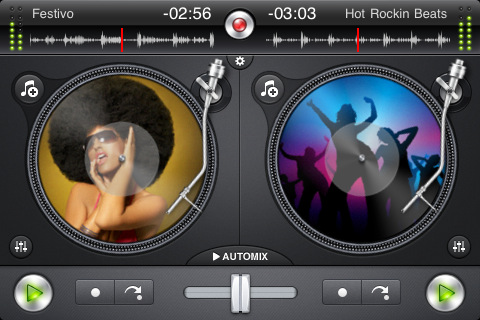 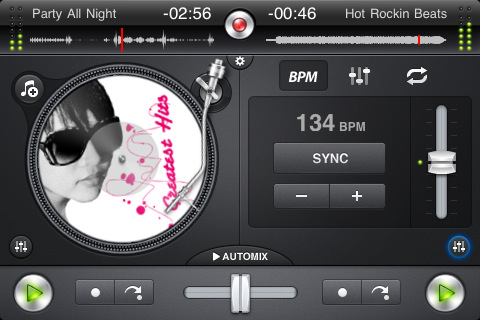 This app is popular with:
djsmusiciansamateurs