.
Overall Satisfactionc83
This is easily the best delivery status app on the market.
and I believe it has always been the best package tracking app.
This app needs push notifications when a package's status changes.
I should be able to refresh the list.
Thanks for the great update.
By far the best tracking software out there.
And love how it syncs with my Dashboard widget.
Amazingly easy to use great interface just brilliant.
Fun & Engagingc88
I love this app and use it all the time.
Seriously awesome.
Usefulnessc92
Always kept up to date ad works great.
This app allows you to track everything you're waiting for.
Even more useful with Junecloud syncing.
extremely useful and beautiful to boot.
there is an app that can track everything in one place.
so this is an indispensable app for me.
Production Valuesc95
polished interface.
Love the beautiful user interface.
Great visuals.
Ease of Usec87
simple app offers everything I could want.
the least that can be included is simple push notifications.
Amazingly easy to use great interface just brilliant.
So easy to use and super convenient.
Clean easy to use interface.
smart and easy to use.
Updates & Supportc66
Version 6 is very well done.
the Mac widget version rocks.
The customer service is also fantastic.
This is easily the best delivery status app on the market. found in 110 reviews
iPad and Mac - freakin' ROCKS. found in 9 reviews
You have the best delivery tracking app in the app store. found in 42 reviews
This app allows you to track everything you're waiting for. found in 5 reviews
check out their free dashboard widget and you'll get free push notifications. found in 7 reviews
This is must have for anyone who orders things frequently. found in 4 reviews
Best tracking app on any platform. found in 2 reviews
Amazing application to track all your shipments in one folder. found in 9 reviews
" makes moe sense for a package tracking tool. found in 4 reviews
and syncs flawlessly with the desktop version. found in 4 reviews
Hands down the best package tracker app in the App Store. found in 66 reviews
It said background notifications but they are not working. found in 7 reviews
Love the layout but at $5 this app definitely needs push notifications. found in 50 reviews
but I can't believe it's missing push. found in 5 reviews
If they fix the notifications issue. found in 3 reviews
the Today screen widget does not update until you relaunch the app. found in 2 reviews
Needs notifications Also needs to have the China post added. found in 5 reviews
0 takes 2 steps backwards from previous versions. found in 1 reviews
FedEx tracking doesn't work for almost 2 month. found in 1 reviews
Needs one thing. found in 2 reviews
but please add delivery notifications for every status update. found in 3 reviews
Wish that it can tract china post. found in 14 reviews
Bar code scanner doesn't work. found in 4 reviews
Great app but notification feature doesn't really seem to work correctly. found in 3 reviews
This app now freezes on startup most times and is quite inconsistent. found in 1 reviews
Today screen widget does not update automatically. found in 4 reviews
If this app had push alerts it would be 5 STAR. found in 2 reviews
Great app but needs push notifications for items that are delivered. found in 50 reviews
If you send an Amazon order number to the iPhone client. found in 11 reviews
Background notifications STILL broken. found in 7 reviews
$5 and STILL NO PUSH NOTIFICATION. found in 9 reviews
Requires you to manually input every package. found in 7 reviews
This app is so worthless without push notifications. found in 8 reviews
It's impossible to paste a tracking number in using the Ipad. found in 5 reviews
It has now become totally useless. found in 4 reviews
No way to fix. found in 6 reviews
so now it does not track any USPS packages at all. found in 5 reviews
EDIT:There are still no notifications. found in 4 reviews
If you can swipe to delete it. found in 14 reviews
The Delivery Status touch, a package tracker is now available for $2.99 for both iPhone and iPad owners.The application is available in multiple languages: English, Danish, Dutch, French, German, Italian, Japanese, Norwegian, Swedish. It weighs in at only 10MB to download. It is highly advisable to have the latest app version installed so that you don`t miss out on the fresh new features and improvements. The current app version 4.6 has been released on 2014-11-03. The Apple Store includes a very useful feature that will check if your device and iOS version are both compatible with the app. Most iPhone and iPad are compatible. Here is the app`s compatibility information: Compatible with iPhone, iPod touch, and iPad. Requires iPhone OS 3.0 or later.
More Info: Find more info about Delivery Status touch, a package tracker in Junecloud LLC`s Official Website : http://junecloud.com/software/iphone/delivery-status-touch.html

Best App for Tracking Packages. Who knew tracking deliveries could be so classy? O Reilly Simply put, this interface is as nice as any we ve seen for this ... 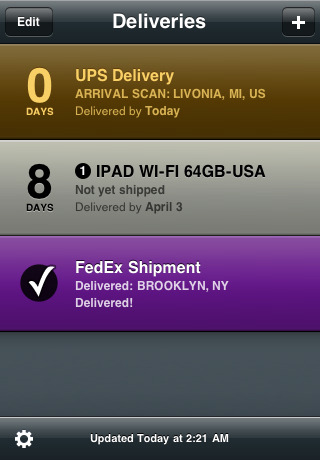 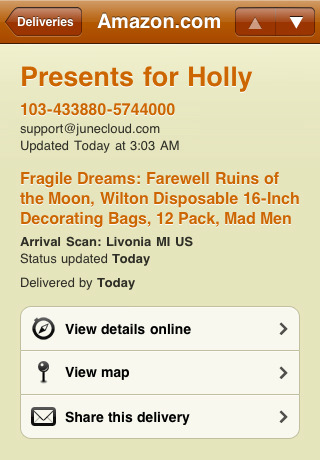 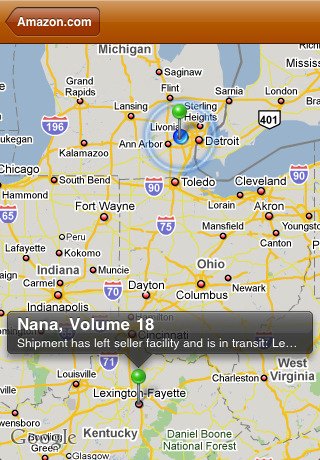 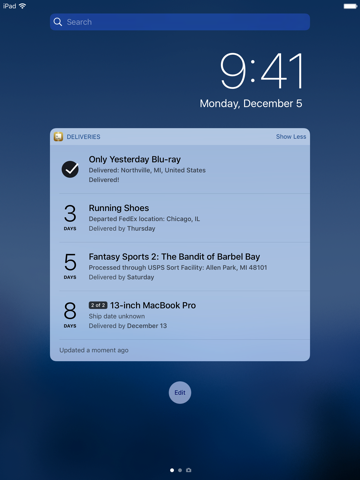 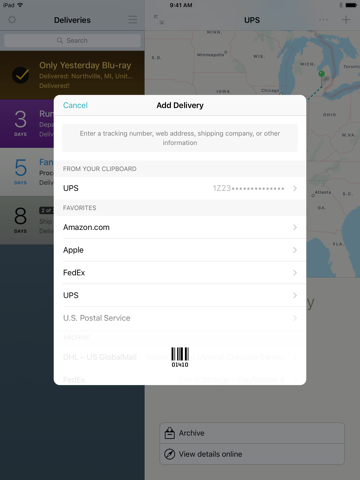 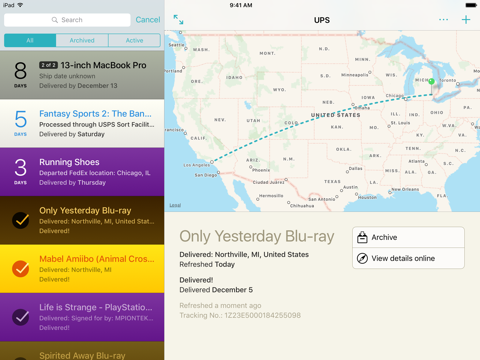 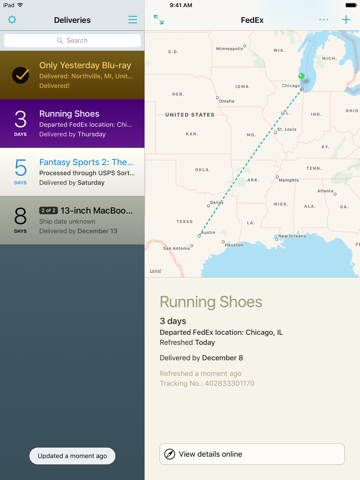 This app is popular with:
online shoppersmac users