.
Overall Satisfactionc76
I think they should have another way to earn rare materials.
There also needs to be a way to earn bigger money and rare metals.
I hope to see more awesome content for this amazing game.
Dang this is one of the best games I've played in a long time.
So far this is my favorite game of all time.
Those rare metals ruined my favorite game of all time.
I REALLY recommend this game to people who like engineering.
until they fix I do not recommend this game.
Best game for iOS ever.
This is hands-down the best iPhone game out there.
Fun & Engagingc82
Once again awesome game and keep up the great work.
This game is fun and addicting and it's even worth spending money on coins.
I would like some more missions though.
More missions would be nice.
More levels and less expensive ships : 3.
It's fantastic and a very fun game.
SUPER FUN AND LOVE THE MULTIPLAYER OPTION.
Super advanced and creative game.
The ability to design your own ship is very fun.
Usefulnessc92
it's so awesome I play it every day.
Value for Moneyc49
One the carrier fighters can only be bought with real money.
But there is a few nice features that coast real money.
and rip-off good weapons cost real money.
Replay Valuec74
More levels and less expensive ships : 3.
Add new levels and add fleets.
A grand challenging game for any one.
a challenging game not=to frustrating game.
Social Aspectsc50
Better Multiplayer.
Reliabilityc56
Update the game.
Updates & Supportc83
-maybe a target practice mode
He's a Pearl Harbor survivor. found in 1 reviews
5 cm turrets. found in 5 reviews
Thanks. found in 7 reviews
-more shooting missions
Happy birthday battle ship craft. found in 3 reviews
Submarine level 1 Submarine level 2
Thanks. found in 5 reviews
Because it gives the best of a simulation game. found in 3 reviews
More power source like a nuclear reactor. found in 9 reviews
We should be able to sell stuff. found in 4 reviews
One of the best games I've ever seen. found in 3 reviews
Best iPad game ever. found in 2 reviews
Running into islands should lower health to make it more realistic. found in 3 reviews
Great time killer. found in 2 reviews
It is very fun and entertaining. found in 3 reviews
New modern day carriers and destroyers with rail gun. found in 4 reviews
Super advanced and creative game. found in 6 reviews
it will be the best game in the WORLD. found in 3 reviews
Awesome can you make a car craft. found in 2 reviews
Great but needs improvement. found in 2 reviews
Bugs fix plz. found in 5 reviews
I literally can't hit the broadside of a battleship. found in 12 reviews
Your missing the point buddy. found in 3 reviews
besides the graphics it's not a bad game. found in 5 reviews
:/
Multiplayer doesn't work anymore with iOS 6. found in 10 reviews
so noobs STOP SUCKING SO MUCH. found in 1 reviews
Cocoa Error no. found in 2 reviews
Good game but needs iCloud for use on other devises. found in 2 reviews
but it crashes when I try to test one of my ships. found in 9 reviews
@Hawkjen
but I can control them in Test Run. found in 6 reviews
you don't get the "money" back and there's no sell option. found in 10 reviews
It crashes when I try to play with my frieind. found in 6 reviews
It's a great game but it needs to have the restore purchases back. found in 10 reviews
Overall great game but I would love to see minor changes. found in 2 reviews
Always have connection issues. found in 3 reviews
The player have no reasonable way to make money without buying it. found in 6 reviews
It's a good game but you need to update with this comment. found in 10 reviews
Ever since the last update the game had become very crashy. found in 26 reviews
AND PLEASE DON'T DELETE THE GAME. found in 4 reviews
and rip-off good weapons cost real money. found in 21 reviews
Needs to be cheaper. found in 10 reviews
PLEASE UPGRADE TO WORK WITH iOS 6. found in 10 reviews
Battleship craft is the worst game. found in 11 reviews
and please lower the prices on things way to expensive. found in 15 reviews
I have an ipod 4th gen so PLZ fix this bug. found in 12 reviews
now it's almost impossible to hit ships. found in 15 reviews
If you can restore purchases that would be great. found in 15 reviews
The game crash and now I cant't play it anymore. found in 12 reviews
5 caused me to delete the app. found in 20 reviews
This game crashes 24/7 on my overclocked iPod 4. found in 11 reviews
Please put a restore purchase button. found in 7 reviews
Since the last update my game crashes EVERYTIME i play multiplayer. found in 26 reviews
You can't hit any ship past like 6 km. found in 12 reviews
If you are iPhone and iPad owner,you now can download Battleship Craft for free from Apple Store. The application is available in multiple languages: English, Japanese. It weighs in at only 23.7 MB to download. The new Battleship Craft app version 1.4.1 has been updated on 2014-11-25. The Apple Store includes a very useful feature that will check if your device and iOS version are both compatible with the app. Most iPhone and iPad are compatible. Here is the app`s compatibility information: Compatible with iPhone 3GS, iPhone 4, iPhone 4S, iPod touch (3rd generation), iPod touch (4th generation) and iPad.Requires iOS 4.2 or later.
More Info: Find more info about Battleship Craft in Phyzios, Inc.`s Official Website : http://m.phyzios.com/battleshipcraft 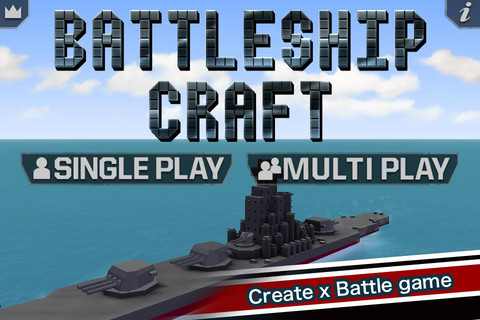 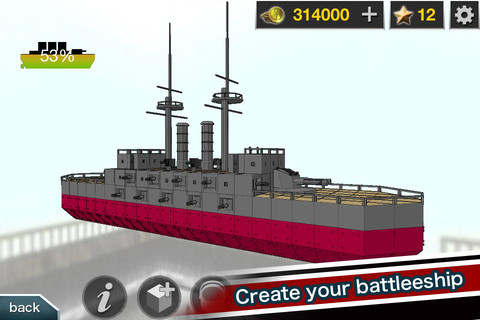 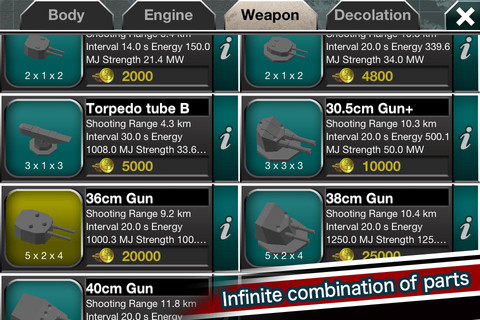